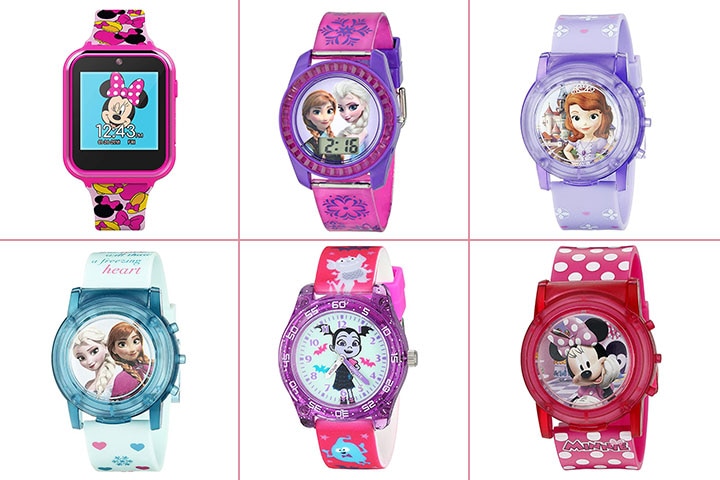 The magic of Disney has touched most children in the world. Whether it is with its theme parks, movies, or TV shows, Disney has managed to capture the imagination of children across the globe.

The legion of merchandise that Disney characters have spawned is a testament to their popularity. Disney watches are among such items that are a sure shot hit with young kids. With so many impressive Disney watches available, it’s a tough job narrowing down on one. In this post, MomJunction gives you a list of the best Disney watches for kids that you can choose from. 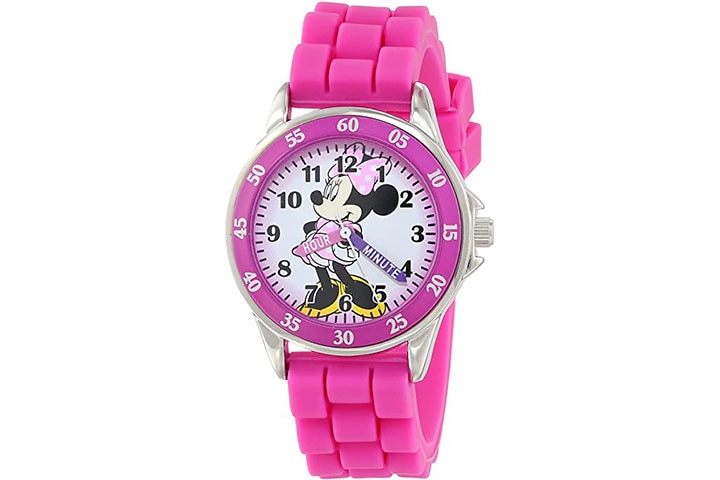 This watch has an official stamp of approval with the official Minnie Mouse on its dial. The strap is pink in color and can be adjusted to fit the child’s wrist. It is an analog watch and ideal for a child learning to read the time. The hour hand and minute hand are in different colors, and both marked out with their spellings. The material used to make the watch is free of toxins or hazardous substances. 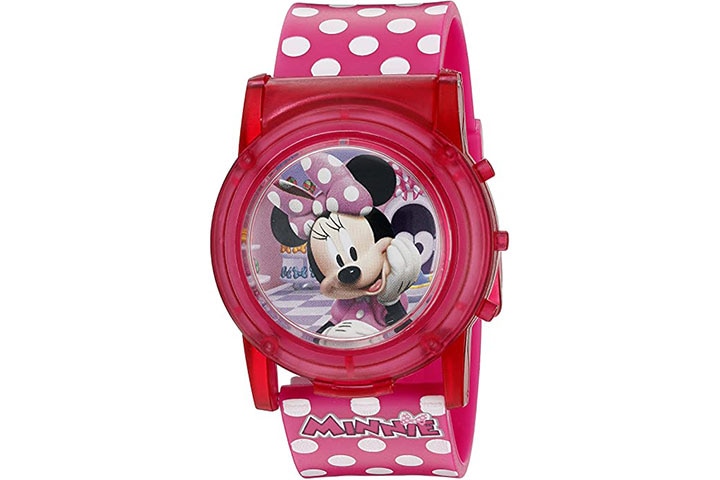 This is another Minnie Mouse watch for kids, but one that has a digital time display. It has a musical feature, which is activated when the watch is popped open. It plays ‘Minnie’s Bow-tique,’ which is the theme song from Minnie’s ‘Bow-toons,’ a popular show on Nick Jr. The watch also has a push-button feature for activating a rotating and flashing LCD light. It has Minnie on the dial, and the strap is pink with polka dots. 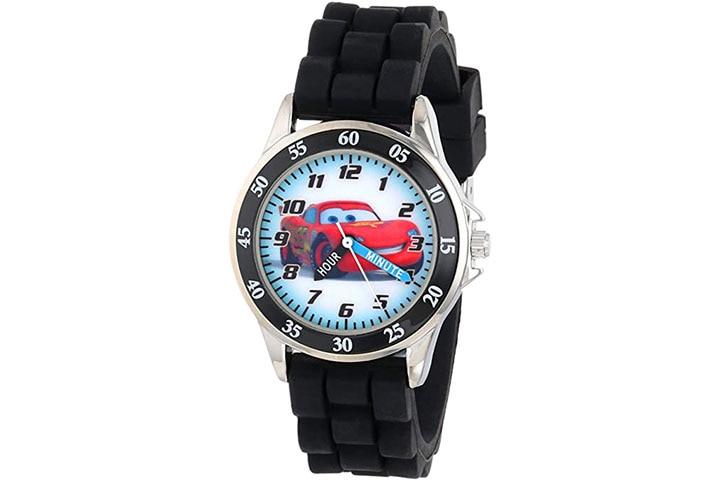 This is based on Disney’s Cars movie and has the lead protagonist Lightning McQueen’s image on the dial. It is an analog watch and has features to help a child learn how to read the time. The watch has hours and minutes hands, with the words written on them in different colors. It also features the hours in digits and the minutes from five to 60 on the two outer rings of the dial. The strap is black and easily adjustable. 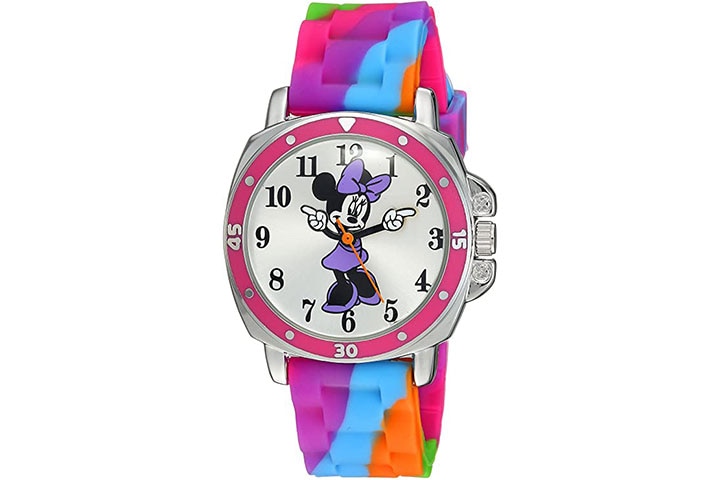 This is yet another popular Minnie Mouse watch from the Disney stable. This analog watch has a strap made of rubber, in a unique mixed tie-dye color combination. The face of the watch is silver, the hour markers are in digits, while Minnie’s hands double up as hours and minutes hands that point out to the designated time. 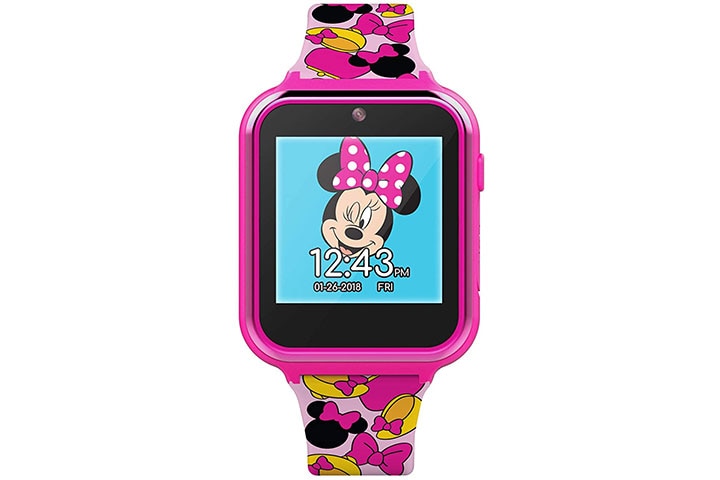 This pink Minnie Mouse smartwatch from the Official Disney brand comes packed with features. It can be charged via a USB cable that comes with the watch. Time and date are displayed digitally. The watch has a selfie camera to take fun pictures. It has three different games, a pedometer to count the number of steps the child takes, as well as a voice recorder, stopwatch, alarm, and calculator. 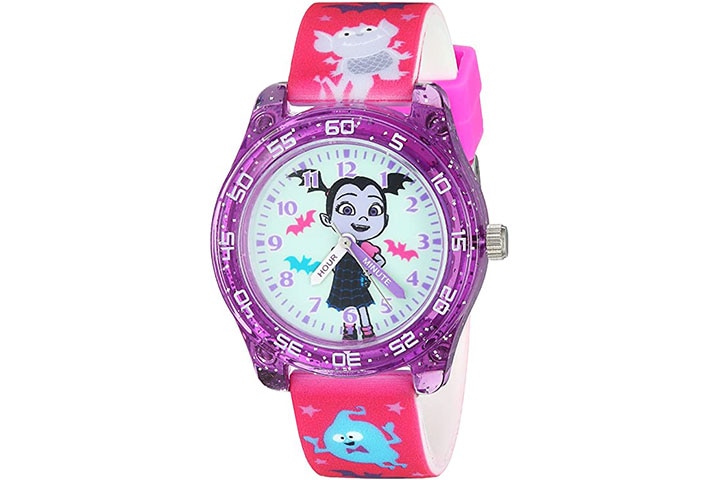 This Disney Kids watch is based on the Disney Jr show Vampirina, which has become a favorite with many young children. It has a large picture of Vampirina on the dial, which is set in a sparkly purple casing. The strap is in neon pink and features some of the other characters from the show. This is an analog watch with the hour and minutes hands marked with their spellings to help those learning to read the time. 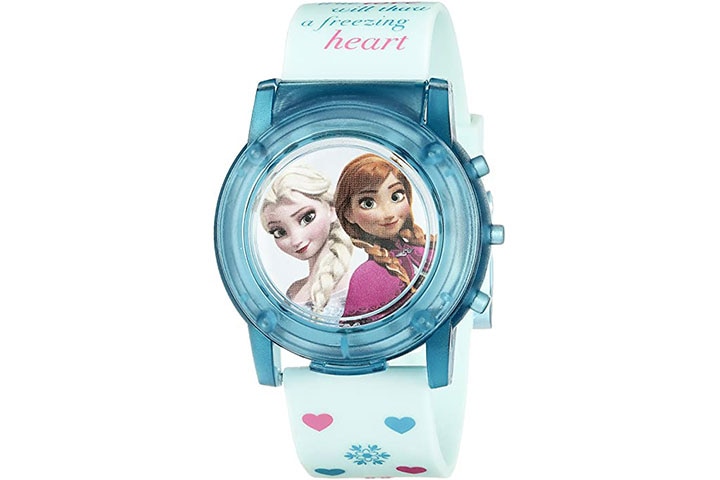 This Disney watch is based on the movie Frozen, which has created a whole new generation of fans. The watch has the lead characters Elsa and Anna’s images on it. It is blue and has flashing and rotating LCD lights that start on the push of a button. It pops open to display the time digitally and also plays music from the movie’s famous song, ‘Let It Go’. 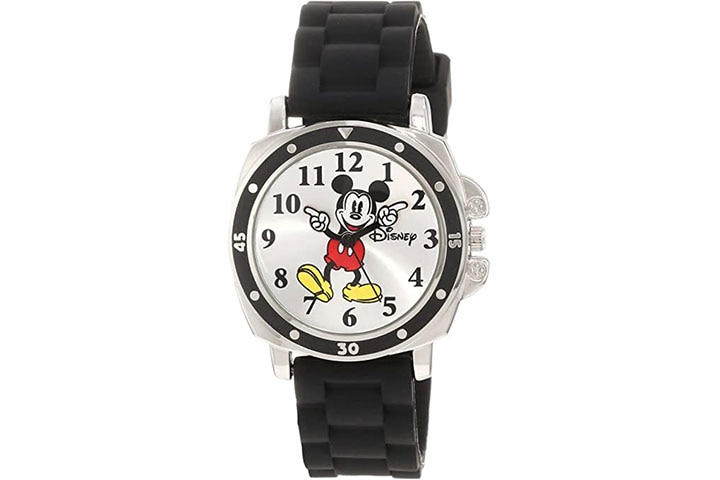 Your collection of Disney merchandise is never complete without something related to Mickey Mouse. The Mickey Mouse watch for kids has been a hit for long now. This analog watch has a black color silicone rubber strap with a buckle. The dial is silver with a black bezel around it, and the hours and minutes hands are in the form of Mickey’s hands, which point to the time. The hour markers are Arabic. 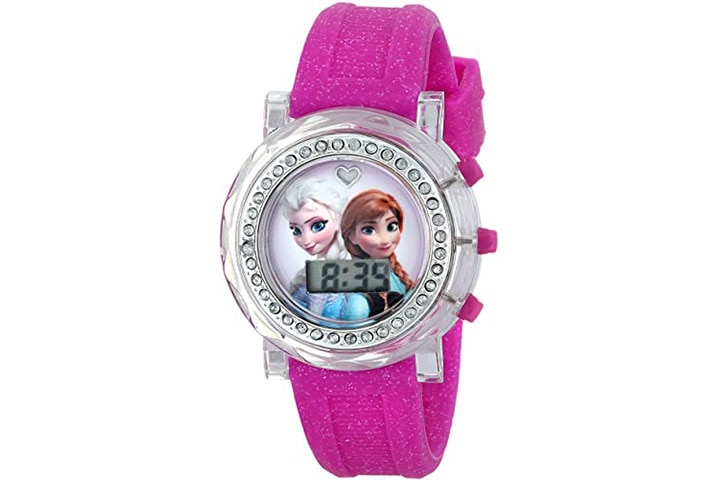 This Disney watch has a shimmery and sparkly tone in all of its features. The face of the watch has every Frozen fan’s favorite, Anna and Elsa, on it with the digital time displayed. It also has a flashing silver heart on it.  The bezel around the dial of the watch has rhinestones encrusted on it. The band is in the form of a glittery pink rubber strap with buckle closure. 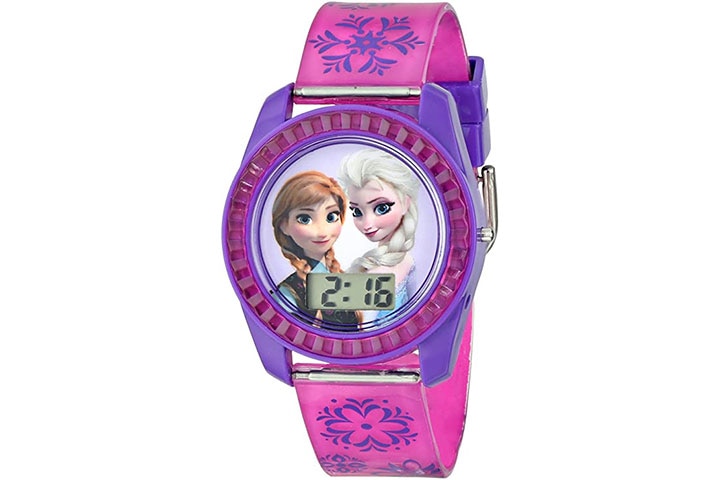 This is another Disney watch from the Frozen movie collection. The watch is pink and purple with lead characters Elsa and Anna both on the dial. The strap is pink with purple snowflake motifs on it. The dial shows the digital time, making it best suited for young users. The strap is adjustable and easy to buckle on. The watch is made with non-toxic and safe materials. 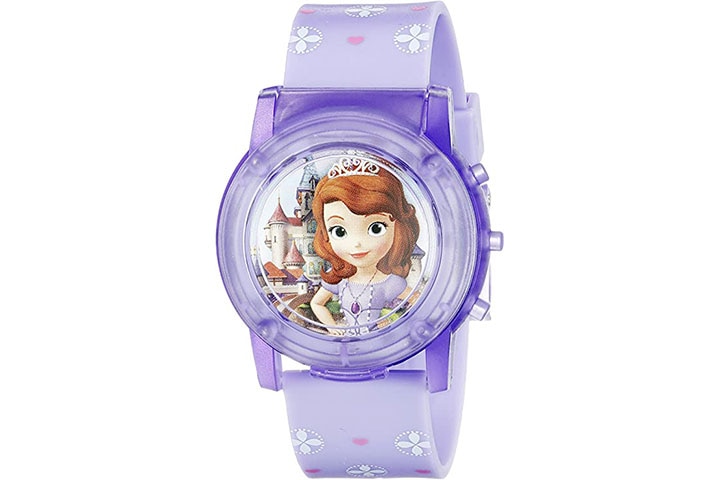 This purple-colored watch from Disney is in the theme of the popular character Sofia the First, whose show appears on Disney Jr. The watch pops up and displays digital time alongside a rotating and flashing LCD light while playing the theme song from the show. The strap is adjustable and has hearts and flowers spread across it. 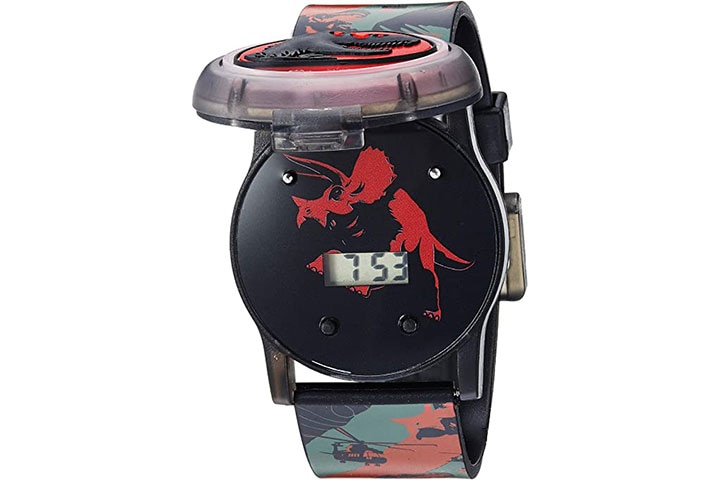 This is an official Jurassic World Watch from Disney. The outer cover has a Jurassic World dinosaur on it, and it pops open to yet another dinosaur’s image, and digital time display. This quartz watch also has a rotating and flashing LED light display. The strap is made of silicone and easy to buckle. It is ideal for fans of The Jurassic World series. 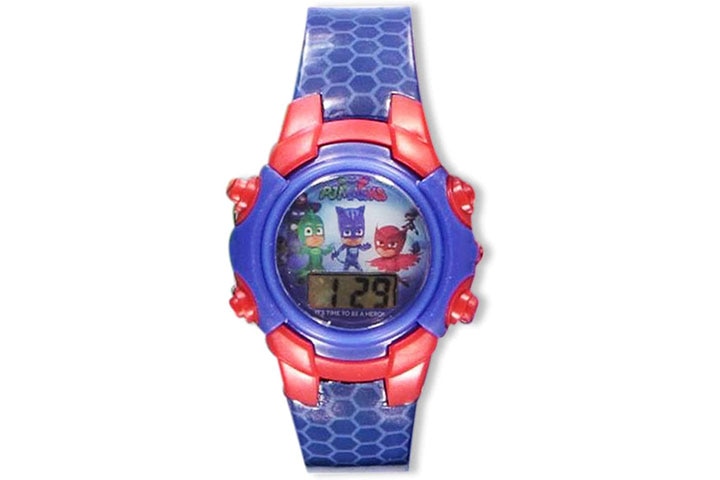 This Disney Kids watch is based on the popular Disney Jr show PJ Masks. It has the series’ three protagonists Gecko, Cat Boy, and Owlette, on the dial, alongside the time that is displayed digitally. The watch also has lights that flash across the LCD screen and are activated at the push of a button. The dial of this watch is blue and red, while the strap is blue. 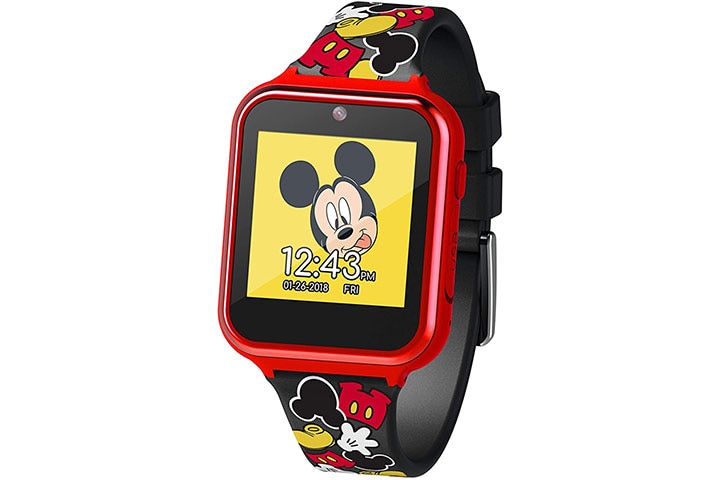 This is a smartwatch for all Mickey fans. The battery is long-lasting, and it is charged via a USB cable, which comes with the watch. Time and date are displayed digitally. The watch has a selfie camera to take fun pictures. It has three different games, a voice recorder, calculator, stopwatch, alarm, and also a pedometer to count the number of steps the child takes. 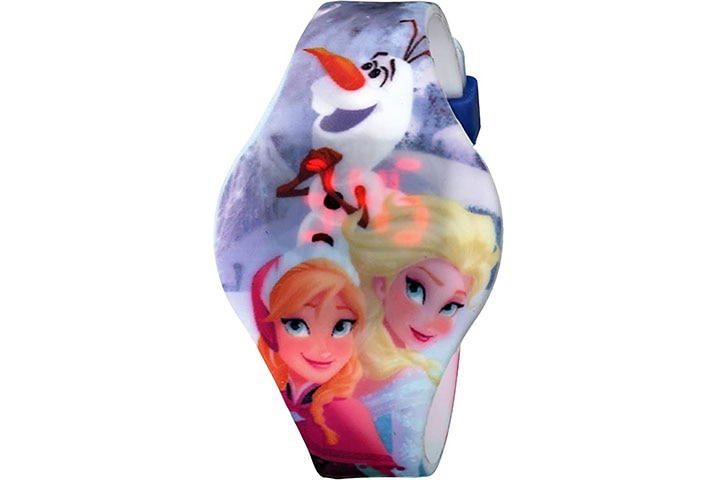 This is yet another Disney watch from the Frozen franchise. This digital watch has graphics from the film spread all over it, including the area which would typically be for the dial. The time appears on the press of a button, in the form of an LED digital display that shines through the graphics. The band of the watch has a buckle closure.

How To Choose The Best Disney Watches For Kids?

Here are a few things that make choosing a Disney watch for your child a simpler task.

With different features, Disney watches will always make a classic gift for children and bring a smile on their face. We hope our compilation of the best Disney watches helps you select the best one for your kid. Does your child have a favorite Disney watch? Tell us about it in the comment section below.

Disclaimer: MomJunction may earn a commission when products are purchased through affiliate links given in the article. However, this partnership does not influence the editorial content featuring in our list. What you need to buy for baby number two

6 Ways To Prevent Stuffy Nose In Kids And Medications

Is It Safe & Right Age To Start