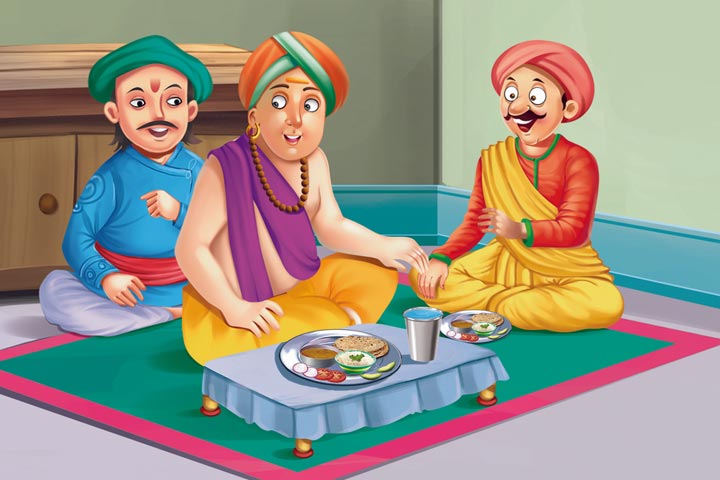 One day, when Tenali Rama and his wife were traveling to Hampi, they stopped by a village  at the foot of a hill. As they were entering the village, they noticed that all the villagers were rushing  towards the temple.

Seeing this, Rama and his wife were curious to know what the commotion was all about. They followed the villagers and saw a large group of people standing and cheering. Rama and his wife managed to go ahead to get a better view of what was happening.

At the center of the gathering was a weightlifter, who was six foot tall. The crowd cheered as he stood at the center, flexing his huge muscles. To exhibit his muscular power, the bodybuilder lifted a huge gunny bag and placed it on his shoulders.

He then started to parade around the crowd, twirling his mustache. “Oh my! This weightlifter is really strong. He can carry 500kg of rice with such ease,” an old man remarked.

“That’s nothing. I am capable of carrying a thousand times more weight,” said Rama in a loud voice.

Upon hearing this, the bodybuilder dropped the bag and gazed at Rama. Everyone in the group were shocked too. .

Seizing the opportunity, Rama addressed the crowd and said, “Yes! What you have heard is true; I can even carry that hill on my shoulders.”

The villagers were even more surprised now. Meanwhile, the weightlifter came to his senses and laughed out loud. He then said, “Is it so? Then why don’t you show us what you can do?”

There was pin-drop silence, and everyone turned towards Rama, waiting for him to step forward and do the impossible.

Without flinching, Rama said, “I said I could do it, but did I say I would do it now? He then turned towards the weightlifter and asked, “How many months of preparation did you need to lift that bag?

“Ah! Then I might need at least six months to be able to carry that hill on my shoulders, and for that to happen, I need to eat a huge amount of food and also get someone to massage my body daily.”

The village headman agreed to provide Rama and his wife a house and all that he had asked for. He also ordered the bodybuilder to massage Rama’s body every day.

“So, we will all meet here after six months to witness your weightlifting feat,” announced the village chief and dispersed the crowd.

From that day on, the villagers supplied Rama with nutritious food containing milk, honey, curd, and ghee, and the weightlifter  massaged Rama’s body.

The weightlifter would keep asking Rama whether he would like to practice with a smaller rock, before carrying the mountain.

Rama would not answer. Instead he would ask the weightlifter to bring in some more food.

Days went by, and finally, the day arrived. The villagers gathered at the foot of the hill to witness the mammoth task.

Rama entered and stood at the foot of the hill in a warrior’s pose and announced, “I am ready.” and stood still in that pose.

The village chief, who was then losing his patience, said, “What are you waiting for?

“I am waiting for your men to lift the hill and place it on my shoulders,” replied Rama.

This made the village head furious, and he yelled, “What are you talking about? You said…”

“But, who will lift the hill for you?” asked the village headman, surprised.

“That’s for you to decide,” replied Rama calmly.

After a while, the village head came up to Rama, and said, “Oh great one, a man of your intelligence can even carry Mount Kailash. I salute you for your wit.” The villagers, too, cheered Rama for his intelligence.

With quick thinking and intelligence, one can get out of any situation.