Home
Baby
All Babies Are Born With Blue Eyes: Fact or Myth?
Prev Article Next Article 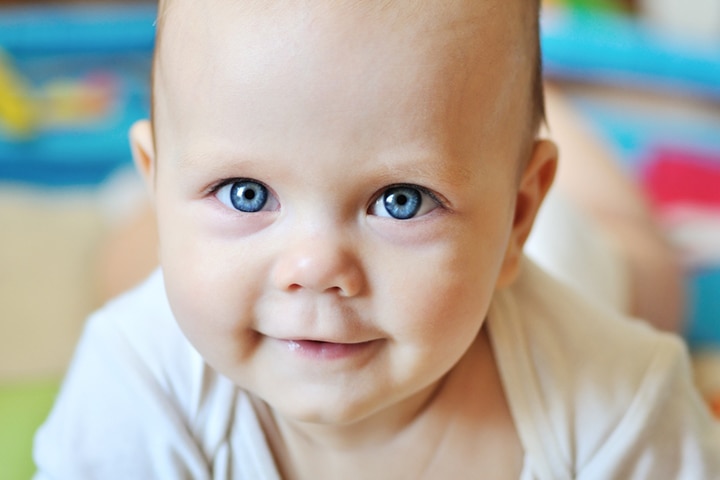 When expecting a baby, one of the attributes you may wonder about is their eye color. Parents may often take a cue from their eye colors and guess the possible eye color of their baby. However, the color blue may linger in your mind more than others. Many parents believe that all babies are born with blue eyes, and the color changes eventually. But do all babies have blue eyes at birth even if none of the parents have blue eyes?

Read on to learn about whether all babies are born with blue eyes, what determines eye color, and what causes changes in a baby’s eye color.

Do All Babies Have Blue Eyes At Birth?

No, not all babies are born with blue eyes. The eye color is determined by the eye color genes found on chromosome 15 and the possible interplay of some other genes. No two sets of parents have exactly similar genes even within the same family tree. Since each parent has their unique genes and gene expression, it is not necessary that all babies be born with blue eyes (1).

Eye color comes from the iris, the striated tissue controlling the aperture of the pupil, which is the central hole of the eye. When we see someone’s eyes and notice their eye color, we see the iris and its color.

The color of the iris is primarily determined by a couple of genes called OCA2 and HERC2 found on chromosome 15. These regulate the amount of melanin present in the iris tissue (2). Melanin in the iris is the same pigment found in our skin. Brown eyes have the most amount of melanin, while blue eyes have the least. In those with blue eyes, the iris is not precisely blue. It only appears so due to scattering of the different light’s wavelengths by the stroma, the upper layer of the iris (3).

A baby receives one allele (gene variant) from each parent, who will transfer an allele based on the eye color genes received from their parents. Alleles for darker eyes with more melanin, such as brown, are considered dominant over those with less melanin, such as blue. Therefore, it may lead to the following possibilities (4).

The same chances apply when a brown-eyed parent is replaced with a parent with any other color darker than blue, that is, other iris shades with more melanin, such as green and hazel. These are approximate possibilities of a baby’s eye color at birth, and several genetic factors could influence the outcome.

What Can Cause Blue Eyes At Birth?

There are babies who are indeed born with blue eyes. A baby could have blue eye color at birth for the following reasons.

Genes play a significant role in determining the baby’s eye color. The following conditions and scenarios related to genes could lead to blue eyes in babies.

There are some genetic conditions, syndromes, or disorders that could cause blue eyes in babies. In many cases, the blue eyes may not appear at birth and manifest a few days or weeks after birth.

In rare cases, babies may develop blue eyes or heterochromia due to birth injuries or other injuries in a few days or weeks after birth.

Does A Baby’s Eye Color Change?

Yes. The hue of the baby’s iris could keep varying during the first year. The color change could be more often during the first six months, slowing down between six months and 12 months (4). The reason behind changes in eye color is the lack of fully developed melanin (10). It usually takes nine to 12 months for the melanin in the baby’s iris to set in its place, giving the eyes their final color.

Sometimes, a baby’s blue eyes may gradually transform into brown as the melanin develops completely. However, it is quite rare and seldom occurs in babies who have inherited blue eyes. Nevertheless, it indicates that you may only be able to tell the final eye color of the baby’s eyes after they complete their first birthday. You may take the help of our baby eye calculator to determine the possible color of your baby’s eyes.

When To Be Concerned?

Eye color is usually not something to be concerned about since it develops on its own. However, you may consult a pediatrician or a pediatric ophthalmologist if you notice the following signs or conditions in the baby (11).

Eye color is one of the fascinating attributes of our body, and parents are likely to be curious about their baby’s eye color. Remember not to fret or be overly concerned about the baby’s eye color since it is mostly governed by genetics. Experts recommend that you must get the baby’s first eye exam at six months, irrespective of whether the infant has any problem (12). Speak to an ophthalmologist if you have any concerns about your baby’s eye color or appearance.