Home
Baby
Baby Sticking Tongue Out: Is This Normal?
Prev Article Next Article 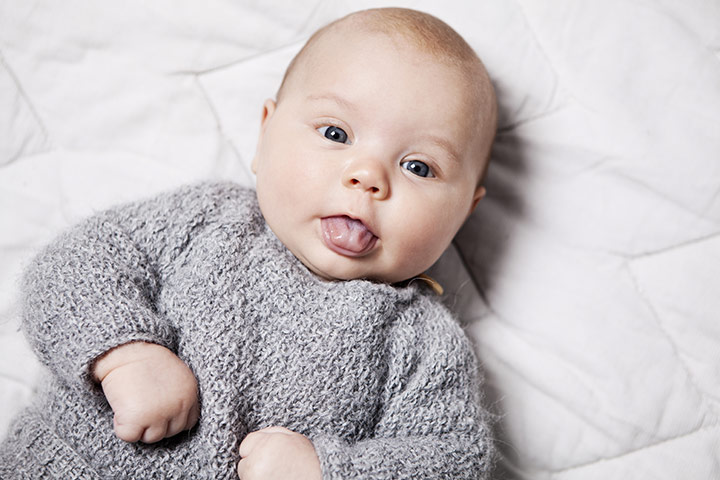 Sticking the tongue out, also known as tongue thrusting, is when the tongue pushes itself against or between the front rows of teethwhile the baby is at rest or swallowing (1). It is more than just a cute tactic. Babies might use it as a sign to convey their needs, or it might indicate underlying pathology.

Are you concerned about your baby putting the tongue out all the time? In this MomJunction post, we tell you about all the possible causes of babies sticking their tongue out.

Baby Sticking Tongue Out: Is This Normal?

Reasons Your Baby Sticks Their Tongue Out

Sticking the tongue out is not always a cause forconcern since it is often due to infant reflexes. Most babies outgrow these reflexesby the age of five to seven months. Remember, if you have any concerns about your baby sticking out their tongue, then do not hesitate to consult your pediatrician.

The following are other common reasons other than reflexes for babies to stick their tongues out.

4. Conveying that they are not ready for solids yet

Babies tend to stick their tongues when they are being fed semi-solids by a spoon. If your baby does it, then it means they still have the gag reflex and are not yet ready for semi-solids and solids. They stop doing this once their tongues are able to push on top of the palate and able to swallow the food (4).

Mouth breathing can cause a baby to protrude their tongue out. A baby could breathe through the mouth due to a variety of reasons ranging from simple cough, cold, clogged sinuses, allergies, inflamed tonsils, or adenoids (5).

Some babies might stick their tongue out while passing gas due to the discomfort and pain caused by excessive gas.

Macroglossia is an abnormal enlargement of the tongue. Some babies might develop a large tongue due to conditions, such as Down’s Syndrome or Beckwith-Wiedemann syndrome. At times, the large tongue might be a result of tumors or due to an injury. It might be genetically inherited, too (6). When babies have very large tongues, they are unable to keep them within the mouth, and hence it protrudes out.

Some babies have congenitally small jaws, and they cannot contain the tongue in their small mouths. This condition is known as micrognathia. In some infants, this condition resolves on its own by growth in the size of the mouth and development of muscles, by the age of five to seven months (7). The other reasons for micrognathiaare cleft palate, and babies with syndromes like Marfan’s disease, Trisomy 13, Trisomy 18, Pierre Robin syndrome, etc. (8).

Hypotonia is a low muscle tone, which can affect several muscles of the body, including those of the tongue. In such cases, the tongue hangs out of a baby’s mouth. It might happen due to various health conditions like Down’s syndrome, Prader-Willi, Rett syndrome, etc. (5).

10. Masses or abnormal growth in the mouth

Any abnormal growth of tissue in the oral cavity or on the tongue might take up room in the mouth. It could lead to sticking out of the tongue. A few conditions that can be responsible for it are a tumor or an infection of a salivary gland or cysts, such as thyroglossal duct cyst (5).

It is a group of disorders of the face and oral cavity. Tongue thrust is the most common type of orofacialmyofunctional disorder (OMD) (9). Sticking tongue out due to an OMD is often due to the abnormal position of the tongue while at rest. The disorder could develop due to a variety of reasons, such as congenital problems, family history, and even prolonged thumb sucking.

There are several reasons why babies could stick their tongue out, ranging from normal reflexes to indicators of a problem. In the next section, we address a few more queries related to sticking out of the tongue by babies.

1. Is a baby sticking tongue out a sign of teething?

Tongue thrust might happen when a baby is teething, although it is not a stand-alone sign of teething. Look for other associated symptoms of teething such as swollen gums, red gums, excessive drooling, babies putting things in mouth, and irritable nature.

2. Do babies with Down syndrome stick their tongue out?

Yes. Babies affected by Down’s syndrome have very small jaws, and they have low muscle tone. These factors cause protruding of the tongue. However, protrusion of tongue alone should not be considered as a diagnostic characteristic of Down’s syndrome. Consult your pediatrician if you have any queries regarding your baby’s tongue-thrusting habit (10).

3. Is a baby sticking tongue out a sign of autism?

Baby sticking tongue out is not a stand-alone confirmatory symptom of autism spectrum disorders. However, it is seen along with various other symptoms in babies with autism. Consult your baby’s pediatrician if you have any doubts about the association of autism and your baby’s tongue-thrusting habit (11).

Sticking the tongue out is among the many cute things done by babies. Although many parents are concerned if the reason is a disease, it is always best to look for other accompanying symptoms. Document the frequency and timing of your baby’s tongue thrusting habit and consult the pediatrician to discuss the probable cause. Most often, babies outgrow the habit.

Do you have any experience with your baby sticking out their tongue? Let us know in the comment section below. Here’s where to buy N95 and KN95 masks for kids

How to clean bath toys, your car seat, water bottles and other kids’ gear

10 Tips To Cope With Insomnia In Children, Causes, And Treatment