Home
Baby
Signs, Test And How Long It Lasts
Prev Article Next Article 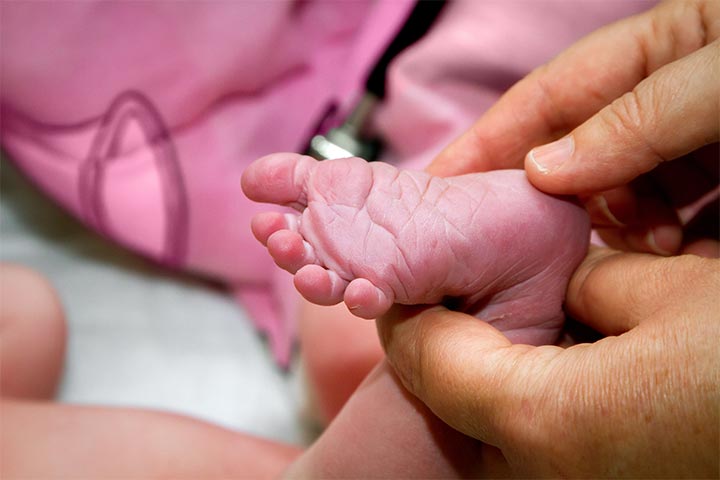 Read this post and know more about the Babinski reflex, its timeline, and when it can be a sign of worry.

What Is The Babinski Reflex?

Babinski reflex was first identified in the late 19th century by the French neurologist Joseph Babinski (2). It is also called the Babinski sign or Babinski response. The academic name for the reflex is plantar reflex.

This reflex occurs when the sole of the baby’s feet is gently stroked from the heel to the toes along the feet’s lateral or outer side. In response, the big toe moves upward while the remaining toes fan or flare out. Babinski reflex is present at birth and lasts up to 24 months.

You may test for the presence of Babinski reflex at home by holding the newborn’s feet and gently stroking the sole from heel to toes with your finger. You will notice the big toe moving upward or in the proximal direction while the remaining toes flare out. Avoid using any sharp objects to elicit the reflex, and use the tip of your finger instead of your fingernail.

When Does Babinski Reflex Disappear?

The Babinski reflex may last up to the age of two years or 24 months in most babies. The reflex may fade away by 12 months in some babies (3).

Why Test For Babinski Reflex?

The presence of the Babinski reflex in newborns is crucial to determine the proper functioning of the central nervous system. A healthy Babinski reflex specifically indicates the normal function of the corticospinal tract, a motor neuron pathway from the brain’s cerebral cortex to the spinal cord (2). This motor neuron pathway plays an essential role in controlling the movement of lower limbs and parts of the torso.

The absence of the Babinski reflex or an abnormal sign in infants may indicate problems with the corticospinal tract, indicating possible issues with the central nervous system.

When Is Babinski Reflex Abnormal?

The Babinski reflex is considered abnormal when it persists beyond the age of two years. The reflex is usually considered a pathological sign in children older than two years and adults.

The following conditions may damage the nerve cells in the corticospinal tract, causing abnormal Babinski reflex in children older than two years (3).

In rare cases, abnormal Babinski reflex may occur in babies due to stroke, which may be a result of other congenital or genetic defects, such as sickle cell disease (4).

When To Be Concerned

If your baby displays Babinski reflex beyond the age of two years, speak to a pediatrician. If your baby has no other sign of developmental delay, it may be a normal delay in the integration of reflexes. Your doctor may ask you to wait for a few additional weeks. If the reflex persists or the baby has other signs of neurological dysfunction, your doctor may recommend relevant tests to diagnose the possible underlying cause.

Babinski reflex is an indicator of good nervous system health in babies. Doctors will check for the reflex during regular checkups, and parents may test it at home, as well. If the reflex seems abnormal or persists beyond the age of two years, do not hesitate to consult a doctor. The early diagnosis of any potential developmental delay could help initiate timely interventions, preventing any long-term complications.