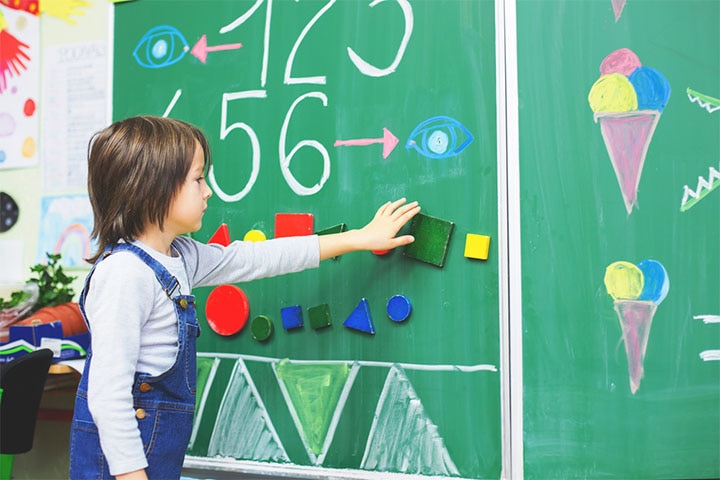 Math is a favorite subject of many children. Addition, multiplication, division, fraction, geometry, algebra, statistics, and theorems — there is so much inside the world of math. Learning becomes easy when there is a little bit of fun involved in studies. To make mathematics interesting for children, we have curated some of the best math jokes for kids. These jokes are entertaining and can also make math fun for children.

Introduce your students or kids to math jokes and arouse their interest back in the subject. These jokes have been classified as per the math categories to enjoy them according to your interests.

These are funny jokes on circles, triangles, rectangles, and acute angles. Read geometry jokes and burst laughter in the classroom. It’s going to be a great experience sharing the jokes while practicing geometry.

It turns out it was right.

Because there is no point.

Because all three angles had a point.

The teacher kept going off on a tangent.

Just take an x-y plane or a rhom’bus.

Because she sprained her angle.

They come prepared with a pair of axis.

A small circle of friends.

I think he must be plotting something.

He liked to practice gong division!

Numbers that aren’t divisible by two.

To get to the same side.

Because anything multiplied by zero is equal to zero.

Multiply both sides by zero.

Though I am great at Biology, cause they are the same thing.

I’ve got 99 problems and one of them is that I count my problems instead of solving them.

The teacher told him not to use tables.

Because he was taught that a double negative in English is bad, but in math, it’s a positive.

The son replied, “I really don’t like long division, I always feel bad for the remainders.”

Counting on fingertips is an easy trick to solve math problems. Make your children smarter by bringing some fun to counting digits.

Read below some hilarious jokes on counting for kids.

Not unless you Count Dracula.

Especially, if you have hay fever.

I know I can count on you!

Because they can’t even!

A friend you can count on.

Because it had more cents!

When I got back, he had only done jobs one, three, five, and seven.

The farmer says, “But, I’ve counted them and I’ve only got 36!” The sheepdog replies, “I know, but I rounded them up.”

Fractions might seem complicated to your child, but the special fraction jokes will make everything easy for them. Read funny fraction jokes for kids and make your little one chuckle loud.

They both have four quarters!

If it’s not half of a whole sandwich, it’s just a small sandwich.

I am more partial to fractions.

Because they just lose some of their fractions.

It’s so small, why bother, dear!

But only a fraction would understand.

You will never stop my plans for world denomination.

Because decimals always have a good point.

Because she would have to convert.

Can I use fractions?

To which the statistics teacher responded, “Well, statistically speaking, you’re more likely to have an accident in an intersection, so I make sure to get through them as fast as possible!”

He thought he could cross, because it was one-foot deep on average.

They called it “Pi A La Mode.”

He now has zero degrees of freedom.

Pi and pie seem similar, but Pi is a value in math while pie is a sweet dish loved by every child. We have shared some interesting Pi jokes to make math sweet for your children.

You’ll end up with a big circumference.

Because it didn’t know when to stop.

Because it just goes on forever.

Baker: No! Pies are round and cakes are square!

Children often call algebra ‘Zebra math’ since their pronunciations sound similar. We have shared such funny algebra jokes for children.

It gives them square roots.

Now I have beer.

They don’t believe in higher powers!

Student: I’m not sure. That sounds 4n to me.

Because you can use the algo-rhythm!

Because it’s too cubed!

Don’t bother me, I have got my own problems.

Because you are supposed to eat three square meals a day!

Calculus is a mathematical study of continuous change, while a calculator is the best friend of a student. Below are some playful calculus and calculator jokes for children to enjoy.

It’s something to count on.

It was doing math.

But don’t count on it, because you may explode.

He makes sure to grab it by the +c.

Because a true pirate never forgets the C.

Because my browser’s history would be more complex than the calculator’s history!

He remembered to add the sea.

But at least you know exactly how steep the learning curve is!

Because, I was seated between two identical twins! It was very difficult to differentiate between them.

These jokes are ideal for sharing in the classroom or while teaching math at home. Math jokes for kids could help improve the child’s perception of mathematics and make them more interested in various math topics. Let your child remember these jokes to enjoy solving math problems. 4 pandemic eating habits we should keep

All Babies Are Born With Blue Eyes: Fact or Myth?

6 Tips To Deal With A Catnapping Baby

12 Effective Ways To Ground Your Kids