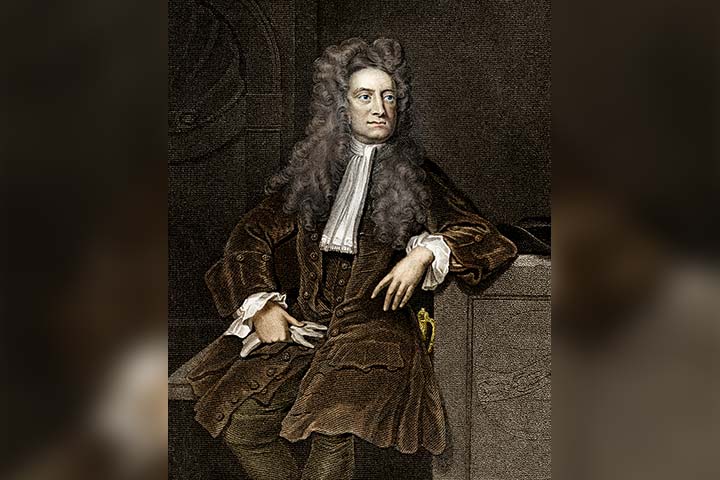 Isaac Newton (1643-1727), an English physicist and mathematician, is considered one of the foremost scientists of all time. His works and discoveries laid the foundation for many future research works.

In this post, we tell you all you need to know about his life, education, family, discoveries, contributions, inventions, and accomplishments. We also give you a few Isaac Newton facts for kids to help you ignite their young minds.

Isaac Newton was born into a puritan family in Woolsthorpe, Lincolnshire, England, on January 4, 1643 (December 25, 1642, according to the old Julian calendar).

He was the only son of  Isaac and Hannah Ayscough Newton. Isaac’s father died three months before his birth. Three years after his father’s death, his mother married the 63-year-old Barnabas Smith and moved with him, leaving Isaac under the care of his maternal grandparents.

Isaac Newton as a child

Isaac Newton’s mother and grandmother, who were literate, taught him how to read and write. In 1653, after Smith died, Hannah returned to Woolsthorpe with her three other children. Newton was enrolled in The King’s School Grantham, a free grammar school in Lincolnshire, where he was introduced to the fascinating world of chemistry.

When Isaac was 12 years old, he was pulled out of school by his mother to become a farmer. He failed dismally and found farming boring.

Later on, Hannah’s brother, the headmaster of the Grantham school, persuaded his mother to let Isaac pursue studies. Newton continued with his studies at Grantham, and in 1661, he joined Trinity College, where he was older than most of his classmates.

Isaac Newton was born to Isaac Newton Sr. and Hannah Ayscough. He did not have any siblings of his own, but had three half-siblings from his mother’s second marriage — two half-sisters Hannah Smith Pilkington and Mary Smith, and a half-brother Benjamin Smith.

Isaac Newton was not married and did not have any children. Towards the end of his life, Newton lived at Cranbury Park, near Winchester, England, with his niece, Catherine (Barton) Conduitt, and her husband, John Conduitt.

How Newton Became A Scientist

Here are a few interesting facts about Isaac Newton you might not have known.

Here is a list of books about Newton for children to read.

Newton passed away in his sleep at the age of 84 on March 20, 1727, and he was buried in Westminster Abbey, London. After his death, the analysis of his body and hair samples indicated the presence of mercury, which was probably due to his experiments. Hence, the cause of death is primarily mercury poisoning.

As one of the most remarkable and influential scientists and mathematicians, Newton made significant contributions in various fields of science and changed the way people perceived the universe. His work is greatly valued and continues to inspire scientists to date.